The hosts of the podcast are Ian and Nikki a couple living in sunny Kendal. They originally hosted the podcast House of Geek which they ran for two years and felt that a podcast about the Lakes International Comic Art Festival would be ideal. An article featured in the local newspaper can be found here.

Ian (@GrumpGeek) is a nerd in all the right ways loving 2000AD and Batman as a teenager. He also enjoys war gaming and board games as well as all the usual movies you’d expect from a nerd. Find his blog at Grump Geek.

Nikki (@Nikki_Draws) is a book worm and loves reading. In particular she enjoys murder mysteries. She enjoys creating comics herself which you can see at her website Watercolour By Nicole. She has published 3 comics, Anxiety Me, Leaf and Moon. 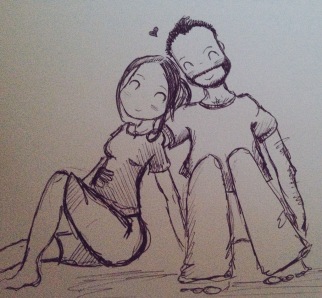 Nikki and Ian. Drawn by Nikki

Mike (@cthulhupunk) is an all out comic geek who will be talking about his favourite comics each episode. He also loves D&D and miniature based gaming.

Pete (@thismanthispete) is a regular contributor. He is a comic artist and his work can be found at thismanthispete.com. He will discuss his work and aspects of being in the industry each episode as well as his love of comics. He also kindly created the logo for the show.

Hear more about the hosts and contributors in Episode Zero One.

Hear all about the festival itself including an interview with the director Julie Tate as well as Kendal Town in Episode Zero Two.